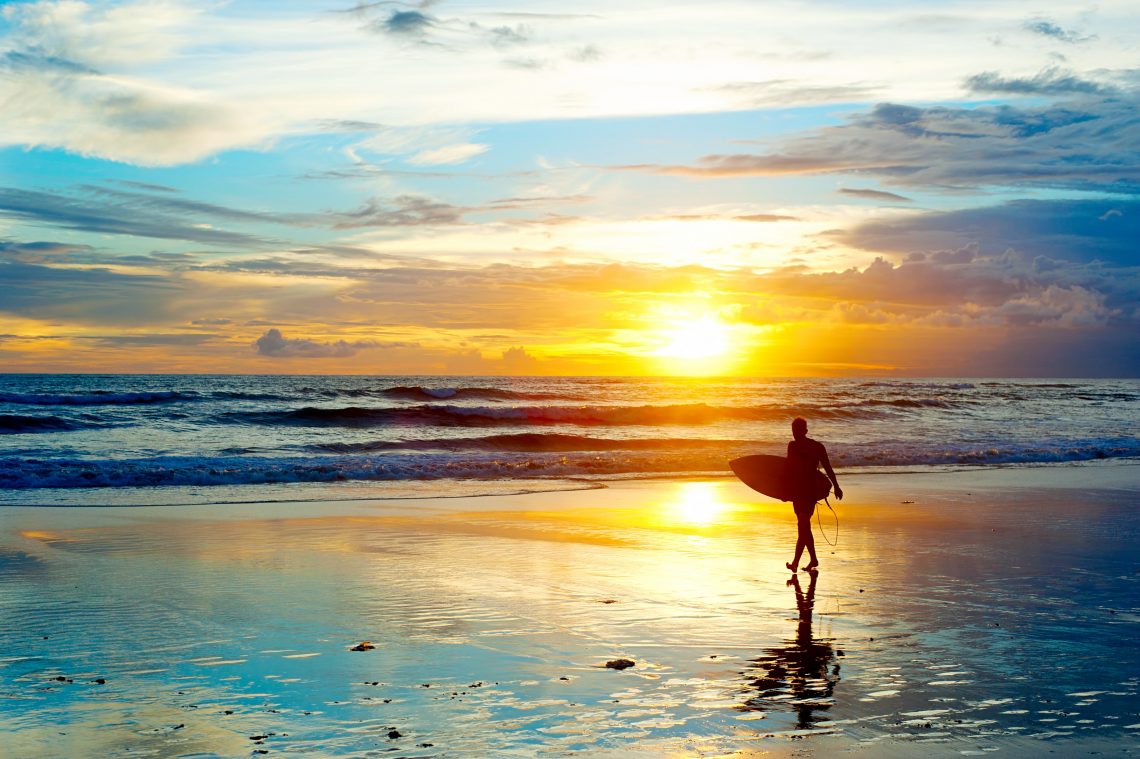 Aceh, the most western province of Indonesia, lost 25% of its total population on December 26, 2004 with the tsunami that caused 300,000 victims from 42 different countries. The hardest hit was Indonesia with 220,000 victims because it was near the epicenter, 32-39ft waves left the water level to reach 65ft above sea level. Aceh boasts of 1,500km of coastline and more than half was hit by the tsunami. Sumatra is the sixth largest island in the world and the third largest one in Indonesia. The destination is recovering from the disaster, and it is ready to welcome all surfers for some fantastic surfing experience in Indonesia! Surfing around the north capital Banda Aceh has been documented by numerous adventurers since the 1980s. Pulau Weh, better known for its diving activities (whale sharks and turtles) rather than its waves, has some poor power around Sabang starting to work with windswell from northeast. Surfers have left their mark even break as Blangujung Right or the right reef in Lambaro, which is easier to ride. Pulau Nasih is worth visiting to surf the long waves of Lam Tadoh Left, in the SSW part of the bay. Both islands are accessible by ferry from Banda Aceh. Weh has some of the most beautiful beaches in Sumatra with basic accommodation available as well. The west coast of Aceh has an accessible road that runs along the entire coastline from Banda Aceh to Meulaboh (225km). The west area of Banda, Lumpuuk (also known as Ujong Batee Beach) is a place for easy black sand beachbreaks. Only 15km south of Banda, a small and beautiful village protects a constant and perfect a-frame wave. Further south there is Cement Factory , which produces great rights near the Lafarge where occur extractions of cement and also near to the pier. Pantai Camara can have perfect long rights out of the rivermouth north of Leupung, but it needs big enough swells to start breaking. South of Mount Gurutee, where a new island has emerged with the reef raised, during the rainy season, you can find unstable but good rights right in the rivermouth near Lamno . Heading to Lhok Kruet, about 10km north near Keudeunga, there is a long left point facing WNW, which is often offshore with SE winds. Further south there is Babah Nipah , not easy to reach, but the rivermouth line-up offers long rides. Before Calang , take a look at the reefbreak 10km further north. After Calang, the coast becomes a straight sandy beach, dotted with various rivermouths and sporadic rocks and reefs. On the other side of the Kuala Bubon Cape, there are also some good lefts on a mixed rocky and sandy bottom, facing WNW. After Ujong Karang and behind Meulaboh towards the city of Susoh and Singkil lies perhaps the most unexplored surfing territory in Indonesia. Unlike the rest of Indonesia, the surf season is from November to March during the NE monsoons, which blow straight offshore into the WSW side of the coastline. There are obviously a lot of waves in the winter season but conditions are usually ruined by onshore winds from WSW. During the summer there are fewer swells but the constant 2-5ft will still provide funny waves, here all intermediate surfers can improve their technique. If the west coast is flat, there is always a chance to surf an unexplored wave in Banda Aceh or Ljokseumawe. With maximum 2ft of tidal variation, tides are rarely a problem.

How to get there : Ask for a valid visa 30 days before arrival. 4 airlines offer daily flights between Jakarta, Medan and Aceh. Besides Garuda, there are 3 low cost airlines: Lion Air, Sriwijaya Air and Adam Air (tickets from $ 40). Air Asia offers 3 direct flights per week from Kuala Lumpur; Singapore Airline flies to Meda.

How to get around : The bus from Medan to Banda Aceh takes about 10 hours. There are 2/3 ferries every day between Ulee Lhe and Pulau Weh. Lhok Nga is only 30 mins from Banda Aceh by “labilabi” bus so making a round trip every day to get a better hostel might be an option that should be considered. The streets are still affected by the tsunami catastrophe.

Accommodation and food : Mami Diana’s Losman, in Pantai Camara, is a good accomodation. Surf Travel Online sells Aces surf camp packages: 6 nights cost 700/1000 $. Staying in Meulaboh is a great option, although all village accommodations offer basic Losmen. Aceh coffee is one of the most delicious in the world.

Climate : Sumatra enjoys a humid tropical climate where temperatures change very little from season to season. Temperatures range from 23-30 ° throughout the year. There is usually a dry season, which runs from March to August (influenced by the continental air masses coming from Australia), and a rainy season from October to January (the northern part of Sumatra suffers the greatest amount of rainfall). Winds are usually moderate and they are very easy to predict: the monsoon from the south and east will blow between June and September and from the north-west between December and March. A swimsuit is enough throughout the year.

Dangers and annoyances : Aceh was the place most affected by the 2004 Tsunami and despite the reconstructions, there are still many scars. Medical help for serious problems isn’t so close. Aceh is messed up due to independent conflicts. There are rare gun fires, but transportation can become difficult due to blocked roads and bombed buses. Malaria is widespread.

Practical advice : Oceanzone surfshop in Lhok Nha may have something, but better to have your own equipment rather than to buy it there. Remember to dress appropriately, local women are always fully dressed. The west coast of Sumatra stretches for 375km from the province of North Sumatra in the northwest to Bengkulu in the southeast.