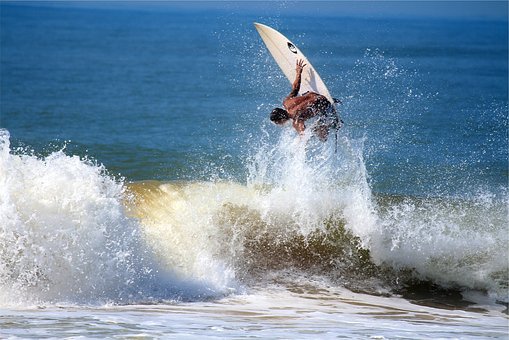 Surfing in Adelaide, the capital of the South Australia!

Adelaide is the capital of South Australia and it has a population of about one million people. The spots are close to each other but crowded because of a very narrow swell window. The Yorke Peninsula is a 4h drive west of Adelaide and this crooked finger of rock presents some incredibly waves at its tip, which is part of the Innes National Park. On a 40km (25mi) stretch, there are 15 known quality breaks, usually short and powerful reefbreaks down sheer cliffs. This amazing concentration of quality waves suit experienced surfers with no fear of air drops and Australia’s dangerous wildlife like sharks and snakes. To top it off, Kangaroo Island is Australia’s 3rd biggest island, measuring 150km (96mi) long, and featuring many remote and spooky surfspots, exposed to the full force of the swell coming out of the Great Southern Ocean. Treat yourself to a wonderful surf holiday in Australia!

Without a doubt, Chiamans is the classic spot for experts. The line up is small and crowded, the drops are vertical, the reef is shallow and sharp: it is dangerous to get in and out of the water but the tubes are excellent. In the summer when everything is flat, Ethel Wreck can produce small but very powerful waves. There are often too many currents and the waves are disorganized, but when it’s on it’s a crowd magnet! Pondie is safe when strong southern winds hit the reef at low-mide tides. It takes a long walk on a private property to get to Trespassers , a right with a heavy take-off and good workable walls, that don’t like high tide so much. Salmon hole is a scenic right point, when winds blow from the North, it’s fast, hollow and long (watch out for the rock in the middle). If there is wind from the S, check around the other side at Daly Heads where there can be big waves. Spits sends long lefts, located in an area with many currents and sharks but with waves that you have to ride.

The spots in the Gulf of St Vincent usually work well with medium-high tide. For this reason in the summer, which is mostly flat, don’t expect waves higher than 5ft. The esplanade gives us easy access with many parking spaces. If there is a storm with gusty winds from Southwest try Y-Steps or The Hump at Christies Beach, where powerful A-frame waves can be created. With western and southwestern swells (and possibly eastern winds) try Seaford which offers the longest walls in the area despite the sections and crowds. Trigs Beach needs the same conditions to work.

The south coast on the Fleurieu Peninsula picks up more swell and is offshore when N winds are blowing. The epicenter of Encounter Bay is Victor Harbor, the most popular holiday area in South Australia. Expect some brilliant beachbreaks, quiet points and a few big wave surfing location: it is recommended to surf here before the summer winds arrive from South.

Middleton Point offers peaks for all beginners or intermediate surfers. Drive west to The Dump , near Granite Island, for powerful reef rights, or Waitpinga as a last chance, it may be empty but be careful to currents and white sharks. The more adventurous can take the ferry to Kangaroo Island which offers numerous empty beaches. Pennington Bay is a very shallow beach that can be fun with medium swells and northeastern winds. If the swells and your confidence in the ocean increase, try Cape Kersaint with its left pointbreaks, it’s exciting! Due to the depth of the bays, the ranges of the tide can be significant, above 8 ft. This is one of the few regions with more tidal restrictions. Winds blow from the South and the Southwest most of the year, except in winter, in which blows from the North and the Northeast and provide perfect conditions for surfing.

How to get there : A valid visa is required for all nationalities except for New Zealand. There are 20 flights from Melbourne and Sydney every day. Driving from Melbourne takes 10 hours. Taxis take $ 9 from the airport to the city. It takes 4 hours to reach the end of Yorke and 1h30min to reach Victor Harbor.

Getting around: Take a boat ride on the Esplanade on the central coast. Drive but avoid doing it during the high season. Kangaroo Island is a 30 min flight or 40 bus ride to Cape Jervis. It’s a good idea to rent a car: it costs $ 215 per week.

Accommodation and Food : In Yorke, use cheap caravan parks near the surf spot. Get an apartment in Marion Bay: if you are a large group you will spend $ 9 per person. On the south and central coasts, look for an accomodation in hostels. The Beachport costs $ 9, the Grosvenor Hotel in Victor Harbor is recommended. In Kangaroo, get ready to camp or go to the Ozone Hotel in Kingscote.

Climate : The climate is mainly dry with hot summers. Sometimes  it reaches a peak of 35 degrees. The ocean ensures cool, mild winters. The variation in temperatures varies from 16-27 ° C while in winter can range from 8-16 ° C. The rainy season occurs between May and August. Sea temperatures are low compared to high air temperatures. Winter requires a 3/2 mm wetsuit and boots. In the summer, a thin wetsuit is enough but most surfers prefer to use winter ones.

Nature and culture : Outside Adelaide, the wild steppes and parks (Urimbirra Wildlife Park, Victor Harbor and Gorge Wildlife) are the predominant landscape. Don’t forget to visit Rodney Fox and the Shark Museum. The fishing is extraordinary. 50% of the Australian wine is produced in this area.

Dangers and annoyances: There are often strong currents during tides and winds. You better surf when other local surfers are riding waves because it means that maybe there are no sharks.

Tips : There are all kinds of waves. Check out Cutloose or MidCoast Shop & Board in Lonsdake or the Nasty Board in Baverly. If you are in Victor Harbor, stock up on Surf Power. There aren’t any shops in Yorke. A shortboard costs $ 400 while a longboard costs $ 600.