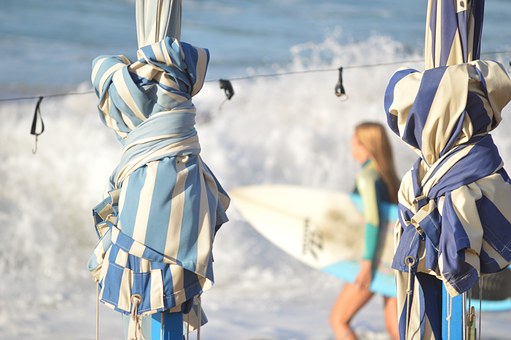 While Oahu and Kauai are famous for their north-south coast split, Big Island is an east-west story. The youngest island in the chain continues to grow, Hawaii is in fact known as The Big Island, due to its size, which is almost double that of the others combined, and for its active volcano. The lava flowing from the Kiluaea volcano continuously shapes the landscape on its way to the sea which can create both future breaks and destroy existing ones. Despite Oahu picking up the history of surfing, Polynesian immigrants probably began surfing Kealakekna Bay centuries ago, making the Big Island the birthplace of surfing activities and the aloha spirit. There are many crowds and locals but accesses to remote spots that require long walks or 4WDs are empty and conditions are less competitive than most Hawaiian line-ups. Surfing in Hawaii reaches its peak on the Big Island!

Kohala Lighthouse is a good example of a “hot spot” that is quite hidden and it isn’t easy to access. This left reefbreak is sheltered from the NE trade winds, despite its eastern position. Be very careful while parking there.

Nearby there are numerous spots that work such as Halelua where according to legend, centuries ago, Chief Nu’uanupa’ahu was misled by Chief Kalaniopu’u with sharks. Downwind is Kohala Coast, which gives its best with S or N swells accompanied by offshore breezes.

Kawaihae Harbor is the official reference point for the tide and it is home to multiple reefs for beginners. Lots of right swells from west-northwest. Most of the beaches are steep, narrow and covered in gray and black sand like Hapuna, the largest island. They are perfect for bodysurfing and bodyboarding. The recently opened Cona Coast State Park is home to powerful, long waves that break on a coral plateau such as Maha’ilua or Makalawena (a little further on).

Pinetrees is a great quality wave magnet, favoring lefts with swells of any size. Most of the competitions on the Kona Coast are organized around the easily controllable Kailua reefbreak along Alii Drive, the equivalent of Big Island’s Kam Haighway.

Banyans is the favorite spot of the locals as it forms beautiful powerful right in winter and short left in summer. Keakakekua Bay is the first surfed beach in Hawaii, characterized by small and perfect lefts of Ke’ei, also called Shark Point. Reaching this spot requires a lot of paddling, but once you arrive you will be satisfied by the perfect waves that this spot offers: watch out for the coral. With S swell, drive to Kau Coast in the south, checking out spots like South Spot. On the west side there is Kahuku Ranch: big peaks with NE breezes. When big swells come from the S don’t miss the green sand beach and find your way to surf the long left, of Kaakualu Point. To hike the Puna Coast Trail, register first at the Kilauea Visitor Center in Hawaii Volcanoes National Park.

With big swells from S or SE Keahuou Point sends long lefts; nearby there are other peaks such as Halape and Apua which work if they are large enough.

Hilo’s wave power is extremely low in spots like Richardsons where the quiet reefbreaks provide perfect waves for learning and progressing.

In Honolii there are fast left and right in front of the rivermouth that was saved by an industrial project that wanted to tame the current of the river itself. Check out Waipio Valley’s black sand beachbreaks for leisurely rides; to reach this area you need a jeep (the road is impassable with other cars) or an hour’s walk. The Big Island situation is difficult due to the swell reflections of the Hawaiian chain towards the north. Winter swells are W-NW but should come from N-NW: these swells suffer from severe filtering on their way to the shores of the Big Island. With the exception of October to March, the best swell direction for Hilo, Hamakua is N-NE while for Kohala and Kona it is from W. Winds from E-NE constantly generate waves from 1,5 to 5ft: best surf with Kona winds from S-SW. From April to September, South Pacific swells bring a regular supply of 2-7ft waves in the Kona, Kau and Puna areas. The period between July and October is the best for hurricanes from the East Pacific which instead send waves from the E – SE measuring between 3-7ft in the area of Puna and Hilo. Due to the high mountains, in the morning the wind is offshore on both sides of Hamakua and Hilo which usually suffer from NE onshore winds. These winds fade somewhat in the winter when the winds from S to W come, locally known as “Kona” winds. The tides vary a lot around the island, although they do not exceed 3ft. Pay attention to the tide level in the reef spots!

How to get there : A 90 day visa is obtained as soon as you enter. Fly to Honolulu (HNL) and then use Aloha or Hawaiian Airline. Most domestic inter-island flights cost $ 93 (pre board boarding: $ 25) Remember that Big Island has two int’l airports: Kona, which flies from Japan and LAX / SFO On United and LAX On AMerica, and Hilo. The boarding fee is $ 6.

Accommodation and food : Stay at ALii Drive. Most of the apartments in Kona are well stocked with everything, including kitchens. The cost of a week is 6 times the daily rate, and the monthly rate is 3 times the weekly rate. Hale Kona costs $ 95 / for 2 people. A studio in Kona Bali Kai near Banyans costs $ 195/2 people (check Wavehunter’s accommodation list in north Kona). You will pay $ 20 for a meal.

Climate : Hawaii is full of microclimates, thanks to the peaks of its high mountains, Summer temperatures (May-October, 29 ° C) are warmer, peaking in August and drier than in the winter months (25 ° C ). February and March are the coolest months. Temperatures can drop as low as 10° C. During the summer the trade winds are more persistent and they can last for weeks. In winter, however, they are blocked by the fronts bringing winds from SW-NW with intervals of clouds and rains. The water is warm, so bring a short wetsuit for windy days.

Nature and Culture : Climb Observatory Hill, Mauna Kea’s Summit, 10km away and 1.5km to the top. It is possible to snowboard on the top or slide on Kapoho Crater. Don’t miss the thrilling spectacle of Kilauea as it erupts red lava. Visit The Pacific Tsunami Museum located in Hilo.

Dangers and annoyances : Don’t go into the water posing as it will only bring you problems with the locals. Avoid the crowds of Hilo and Kailua; be careful when you park in remote places, do not leave anything in the car. Reef cuts, currents and sunburn are always a threat.

Tips : Since some airlines charge a lot to transport equipment, it may be cheaper to buy it there. Stop by the Big Island Surf Company or Paficif Vibration in Kailua, or order from Orchidland Surfboard in Hilo. There is the option to book a girls-only surf camp in Hilo (Bug Island Surfcamp). Beginners should try the Hawaii Lifeguard Surf Lessons in Keauhou or the Ocean Ecotours in Honolohau.