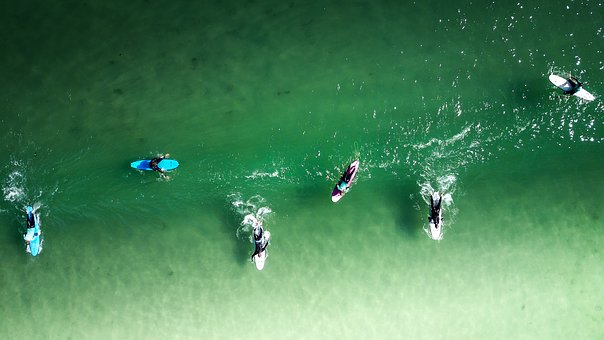 Surf stay in Australia: explore Byron Bay with us!

For your next surf holiday in Australia choose Byron Bay! It is located in the southeastern Australian state and it overlooks the Pacific ocean, attracting a wide range of curious visitors. Dolphins and sharks have lived the long, golden beaches and have been enticing surfers for at least half a century. From a hippy coastal town, Byron has changed into an important city, attracting movie stars, builders and several backpackers. The lack of waves with decent height creates erratic conditions, releasing cyclonic swells in the summer and large waves worth riding in the winter. They usually break “shoulder height” and small waves. On the best days you can see short closeouts, creating lots of pointbreaks.

In the 1960s Byron became popular as a stop on the last trip between Sydney and Noosa. As you leave the Gold Coast, drive south to the Tweed River and check out the beachbreaks of Fingal Head (facing Cook Island), also visible from the D Bah car park. When the swell is small, you can find great waves in Cabarita , often chosen as a racing spot due to its consistency. Most of the beaches below Byron are empty, with congregations in spots like Hastings and Pottsville where varying sand barriers form along the desert coastline with a high number of sharks. In addition to the breakwater at Brunswick Heads, Byron offers many surfing spots such as The Wreck , which is located just near the village and produce all kinds of waves up to the beachbreak, formed from an old shipwreck. The pass is a wave of world-class quality, suitable for both beginners and the more experienced surfers. It offers extremely long and perfect waves for longboarding or practicing cutbacks, with eastern and northeastern waves. Nearby Watergoes there is a longboard and dolphin arena. If you are looking for a quality A-frame beachbreak Tallow is the right place for you, a long beach which produce all kinds of waves, hidden from the Northeastern winds (… but has had fatal shark attacks in recent years).

If Byron Bay attracts the attention of travellers, locals choose spots further south like Suffolk Park and Broken Head, which work with swells from Northeast and Southeast. Today Lennox Head is considered as one of the most beautiful spots in Australia, with its fast waves, the tube riding, the length of the ride and the ability to handle the largest swells from Northeast and from South. What makes this spot not very accessible is the current and the crowds of local surfers. To the south there are empty reefs (towards Ballina) where there are North and South Walls, in the mouth of the Richmons River. These spots are protected from the Northeast and South wind, but more experienced surfers surf them in any kind of condition.

On winter (from April to September) the low pressures of the Tasman Sea which form constant swell from Southeast, usually produces 2-6.5ft waves (from April to September). The summer, from December to April, match with the tropical cyclonic season of the Coral Sea, which produces about 2-3 cyclones per month and swells that last about 1-7 days for each cyclone. Nevertheless, the waves are not predictable and if the cyclone is too close the conditions will be irregular with active wind. The wind in this area is so important, the best one is from Southwest, which often blows from May to August. From January to April, there are sea breezes with direction from the Northeast. As a general rule, beachbreaks work better at high tide while pointbreaks at low tide. The tide level can have a variation of 6,5ft.

How to get there : Most international flights arrive in Sydney but Brisbane is only a 2h30min drive. The Bus from Sydney to Byron takes 14h. The local airport is Ballina but Coolangatta, on the Gold Coast, is perhaps more convenient as here you can rent cars at very reasonable prices.

How to get around : There are many roads that run along the ocean, with many curves and hills. Pay attention to speed.

Accommodation and food : Despite its success, Byron Bay has not become a metropolis but it is still quite expensive: sleeping is an example. A dorm in a backpacker costs around $ 15 (Nomads, Art factory) while a double in a hotel costs $ 60 per night and more. A meal costs around $ 20. Lots of organic and natural food are served.

Climate : The climate of the north coast is much more similar to the subtropical climate of the Gold Coast rather than Sydney. The rivers on the north provide a lot of moisture but the mountains and hills produce more breeze. Summer temperatures range from 21-28 ° C, while in winter from 15-21 ° C giving Byron an excellent climatic condition all year round. The waters around Byron Bay are clean and warm (26 ° C in summer and 21 ° C in winter) so a light wetsuit is enough for all seasons.

Nature and Culture : It is a mix of nature and development. The coast seems unspoilt.  You can spot whales between February and March.

Dangers and Annoyances: There are many sharks in Tallows, Suffolk Park and Ballina. The spots are always crowded there, so respect and competition are the rules.

Tips : Avoid the high season, from December to January.