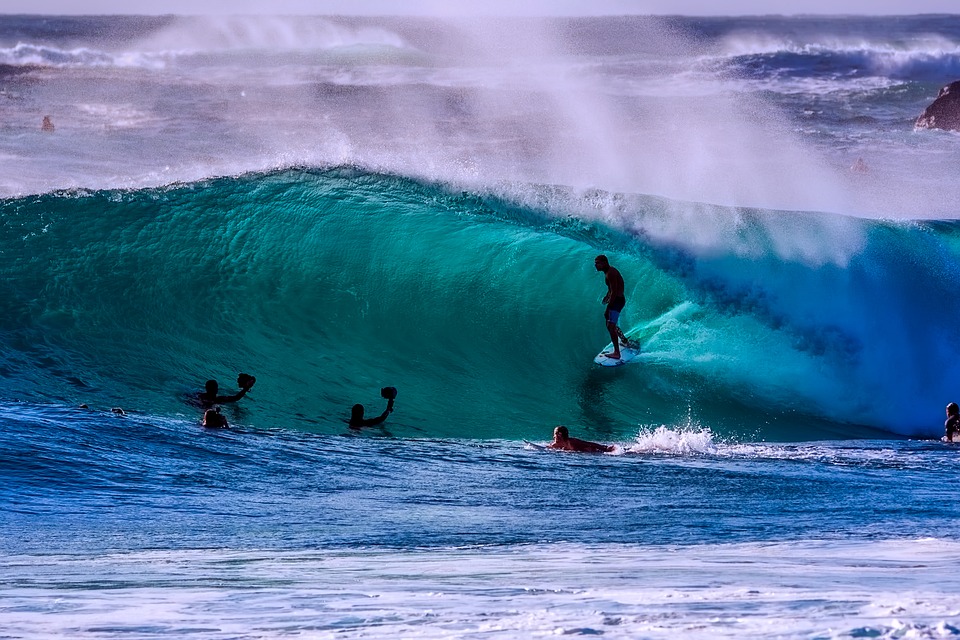 The Gold Coast: spearhead of surfing in Australia!

Surfing in Australia is synonymous with the Gold Coast! Queensland’s Gold Coast is one of the best surfing areas in the world as it combines 40km of legendary spots with a lot of tenacious surfers. It is the most visited stretch of coastline in Australia and it is dominated by skyscrapers, no palm trees and crowds of tourists which make the coast not at all deserted, so don’t be deceived. However the warm  temperatures, the wild nightlife and the long and endless pointbreaks will certainly make your holiday enjoyable. From Sea World you can take a look at The Spit which receives many swells. It is not as peaceful and developed as the rest of this coast and has tons of empty peaks stretching as far as Main Beach. Narrowneck , used to be off the surfers radar until an artificial reef was built creating a perfect sandbar that works with northeastern swells. Surfer’s Paradise is more dedicated to swimmers, but don’t surf between the flags as lifeguards haven’t a sense of humor. Moving south to Burleigh Heads , facing the wonderful Pandanus Tree National Park, there are miles of fun beachbreaks. Broadbeach and Miami are the two best spots but the whole stretch is closed when there are 6.5-8.5ft swells. It happens when all the pointbreaks are working. At Burleigh Heads the big tubes, breaking over sand in front of the rocky shoreline, can be awesome when the swells are from the South and the wind is offshore.

It is not as long and crowded as Kirra, but unfortunately it is more localised. The next right pointbreak is The Alley in Currumbin, which has long rights, well sheltered from the strongest Southeastern winds. It rarely breaks in a tube. All types of experienced surfers can ride these waves, scaring the crowds.

The next break on the south is called Kirra and it offer the longest and smallest tubes in the world. This wave has a very extreme takeoff and it can become a tube: pay attention to the lip which is extremely wide and powerful.

After the First Groye was built in the early 1970s, Kirra has been closed for a couple of years before becoming better than ever when the sand returned. The Second Groyne was built in 1970. Kirra holds sizable swells and record-breaking crowds.

Coolangatta is another urban area with the great waves in Greenmount Point, where long, easy right-handers are protected from the dreaded winds from East. Right behind, you can also find the popular Snapper Rock , with its long right waves that can break all the way to Rainbow Bay. Duranbah or D-Bah is located on the north side of the Tweed River, which mark the borders with New South Wales. The pier of the river mouth enjoy powerful peaks that provide wide tubes in one of the most sophisticated beachbreaks in the world. D-Bah offers swells and crowds, making it one of the most wonderful points for surfing. The main swells from December to March (tropical season in the Coral Sea) come from Northeast and East and they are around 2-8.5 ft. During this period you can expect roughly 2 or 3 storm surges per month which can last from 3 to 7 days. These swells are unpredictable and constant due to the Antarctic depressions and, if the cyclone is too close, it makes the surf very irregular due to the active sea conditions. Winter produces 6.5-8 ft swells from Southeast in the most exposed spots. The best winds (from Southwest and Southeast) often blow from in the cyclon season (from May to August). From January to April, winds are usually weak and they blow from Southeast. The worst period to visit this area is from September to December. As a general rule, beaches are better at high tides and pointbreaks are better at low tide. The tide range can reach 8 ft, so a tide table will be very useful.

Getting around: Renting a car has an affordable cost ($ 30 per day, and $ 20 with local companies). Gasoline costs 80 cents per liter. Bikes or Surf Side Bus with board seats could also be a great idea to get around.

Accommodations and Food: With a lot of accommodations, Coolangatta is the best place where to stay. Hostel prices cost $ 25 per double, youth hostels 12$ per day, while rooms with sea view in a dorm cost $ 35-45 per double. A full menu costs around $ 5-7.

Climate: From November to April is the rainy season with wet days and high temperatures. Cyclones usually hit the northern part of Queensland. During the dry season (from May to October) the stay is pleasant but the nights could be very rigid. Six months a year you can surf with tank tops and shorts (or short wetsuit during the early hours of the morning). During the dry season you also need to wear a 2mm steamer for the morning. A light wetsuit is the one most used all year round.

Nature and culture: There are all kind of entertainment in flat sea days with Sea World, Wet’n Wild, Cableski Movie World, Dreamworld, Currumbin Sanctuary and Fleasy and Jumpiters Casino. There is a lot of nightlife on Orchid Avenue.

Dangers and annoyances: The most likely problems are drop-ins and collisions in these spots. You could be attacked by a local, rather than a shark. Winds from Northeast bring jellyfish. The rate of skin cancer is very high.

Tips : There are over 50 surf shops. Australian Beer offers funny nights on the crowded streets. Very cheap food and drink at RSL Clubs. Queensland is also called “the Police State”, with severe fines and driving license risks. Avoid them until you can.