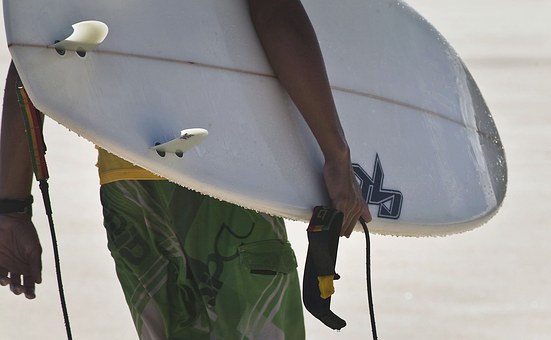 The island of Kauai is waiting for you for some amazing surfing in Hawaii!

Known as “the Garden Island”, this is an ancient eroded volcano that reaches 5000m above the sea level. Separated from Oahu by the Oceanic Channel of Kauai, it was the only island that repelled King Kamehameha’s efforts to unite it with Hawaii and remain independent until 1820. The state decided that the buildings should not exceed the height of the palm trees in order not to destroy the beauty of the scenery. There are many more beaches than on all the other islands, almost 45% of the coast is deserted. Despite its 300 surf spots, its underwater topography isn’t as perfect as Oahu. Fly to Kauai to experience the thrill of surfing in Hawaii!

The north side, characterized by high volcanic cliffs, has many spots and due to the inaccessibility of the Na Pali Coast, it is dangerous to ride its winter swells. At the beginning of this coast there is Tunnels , it’s a wild right full of sharks, which can give you epic conditions but that breaks on the sharp, living coral. This wave (like many others in the area) is for expert surfers only. Hanelei Bay is the premier surfing area on Kauai, providing a variety of waves in a small area. Below the luxurious Princeville Resort, there is the right-hand pointbreak that everyone would love to ride. The spot is well protected from the wind and holds swells of all sizes, it is only accessible via a long row and… pay attention: the locals are aggressive here.

In the Bay there are lots of beachbreaks and some good reefbreaks like Hideaways. Kalihiwai is ideal for experienced surfers: gigantic tubes can be ridden here.

On the Coconut Coast there are some fun reefbreaks to ride and some spots that have waves 356 days a year . Unreals is a pointbreak that works constantly with E swell and offshore winds. In Kealia the waves are small but powerful and with mainly onshore wind conditions; also check out Horners in Wailua, one of the most traditional surf spots for centuries.

For beginners and longboarders the soft Kalapaki reefbreaks are recommended.

Bodyboarding only in Brenneckes , but PK lefts and Acid Drop’s short tubes are perfect for the more experienced. The SW corner of the island hides some secrets including a long and perfect left called Infinities in Pakala. This spot handles the big summer swell from the south as sharks, locals and the sharp reef will help discipline the crowds. Along the coast near Kekaha, there are numerous pointbreaks such as Davidson Point . On the west side, Polihale and Majors Bay are brachbreaks with terrifying currents. From April to September, the north side is mainly flat but the south receives long SW swells ranging in size from 3-8ft, coming from the South Pacific. Throughout the year, constant windswells from the NE create 3-7ft waves which can be ridden on the windward side. During the winter swell season, the wind turns from the SE more often (January is the best month for the S wind). Occasionally S / SW winds (called “Kona”) arrive which provide the best conditions for the Coconut Coast and North Shore.

How to get there : A 90 days visa is required upon arrival. United States offers daily direct flights from LAX. Hawaii and Holiday has 2 direct flights per week from LAX or SF. Alternatively, fly to Honolulu and then board a connecting flight with Aloha or Hawaiian Airlines for 30min (board transportation cost $ 25). $ 6 boarding fee.

Getting around : Since the coastal road is not circular, the location is essential to avoid unwanted guides. 2h drive from Lihue to Kekata. The road from Lihue to Kapaa is fast and the traffic is low. Renting a car in the low season costs $ 135 / week (high season $ 150 /). Some private properties restrict access to some North Shore beaches.

Accommodations and Food : The Marriot in Kalapaki has rooms starting at $ 229 / double and the prestigious Princeville Resort In Hanalei costs as much as a surfboard per night. On the North Shore try Hale Ho’o Maha in Kalihiwai ($ 65 / double). The Sheraton in Poipu rents apartments for $ 80 / bed. You will pay $ 20 for a meal. Princeville is the most expensive supermarket in the United States.

Climate : Hawaii is full of microclimates, thanks to the peaks of its high mountains, Summer temperatures (from May to October, 29 ° C) are warmer, peaking in August and drier than in the winter months (25 ° C ). February and March are the coolest months. Temperatures can drop as low as 10 ° C. During the summer the trade winds are more persistent and they can last for weeks. In winter, however, they are blocked by the fronts bringing winds from SW-NW with intervals of clouds and rains. The water is tropical warm, bring a short wetsuit for windy days.

Nature and Culture : The Point is the hot spot in Poipu and Hanalei Day Resort is the gem for surf lovers. While the nightlife rivals that of Honululu, the marine beauty is unbeatable. Visit Waimea Canyon or Kokee State Park. Kayaking down the river. Take a Na Pail Cruise and hike the Kaialau Trail. Fly the helicopter over Nihau and Na Pail seizures.

Dangers and annoyances : The locals don’t tolerate any bad behavior in the water. Get ready to surf at dawn, in heavy rain or in winds. The North Shore is more suitable for bodyborders as the waves can be very powerful and backwashing. The last shark attack was in November 2003. The rain can be intense on the N-NE side.

Practical advice : Poipu is home to numerous surf schools such as the “Kauai Surf School” or “Margo Oberg’s” in Brennecke’s Surf Shop. The cheapest place to rent a board is Activity Warehouse in Kapaa ($ 10 / day).