Surfing holiday in Indonesia? Yes, in the wonderful Makulu!

Maluku is part of the most eastern archipelago of Indonesia, and this is the one in the Pacific. Although the waves are as great as in the Philippines, these islands are largely ignored by traveling surfers. Occasional incursions into the region have revealed an exceptional variety of breaks, most of which have never been surfed. The east coast of Morotai and Halmahera probably only works with large swells from the north, or with a typhoon from ENE. Palau Recil , an islet off the east coast of the city of Berebere, has a long, wrapping right. Both of these spots have great potential, but they are very subject to winds and currents, so finding perfect conditions isn’t easy. Indo Jiwa, named after one of the first boat trips to this area, is an epic right with fast sections and nice long walls. Village Reform is a super fast right but, among the waves on the reef, it is definitely the last to check. Heading south, Serenade is a surprising left. It breaks almost every day with all the tides: this spot has an impeccable take-off and reaching the line up is easy thanks to a deep channel in the reef. The neighboring right of Short Ledge presents heavy tubes on the east side of the deep bay. Access on land is impossible. The western side of both Morotai and Halmahera have large steep cliffs, which means no surfing, but luckily, some bays have the right topography to keep swells and spots. The first spot in Halmahera is Heavy’s , a long and backwashing left that needs perfect SE winds to be ridden. The nearby Double Dome is the only place where you can find the locals: the children of the village have created wooden boards to surf waves. At Coconut Swing , a wild left breaks but there are other safer and more consistent ones. The main attraction in this area is Salandageke Island. Sidewalk is a perfect, long and quiet right facing NNE, which, especially in small sea conditions, is perfect for longboarders. Book your surf holiday in Indonesia with us now! Although NW Pacific typhoons create epic conditions, it’s much safer to visit these islands in the heart of the Northern Monsoon season (from November to March) for maximum consistency. From September to October is the most ideal time of year to harvest the fruits of the low-latitude typhoons that develop outside Mindanao, Philippines. During the winter, when the NE monsoons arrive, the usual wave size is around 3-6ft, with potential for longer days in the more exposed spots. The winds at this latitude are very weak and variable and they usually give glassy days (except for the frequent rainy storms). The transition months from April to May and from September to October are usually calm with weak winds and hardly any swells. You will find windswells from the southwest from July to September. The tide reaches up to 3ft and hits the most superficial spots.

How to get there : A 30-day visa costs $ 25. Fly to Manado (MDC) departing from Jakarta or directly from Kuala Lumpur (Malaysia) with the airlines Kota Kinabalu or Singapore (SIlk AIr) or Davao, Philippines. International departure fees cost IDR75,000

How to get around : The best option would be to create a group of 10 people and rent a boat in Manado, in which you can spend as much time as you want. You will pay $ 150 per day for a modern boat with A / C. The distance between the spots could be long and the sea rough, so a good boat is essential. Land access is not the solution, as there is nowhere to stay to reach the spots.

Accommodation and Food : In Manado you will be able to sleep in the city for $ 30-110 per day (there are several hotels specialized for divers). Most of the hotels are 30-45m from Manado, but the best resort is on small Siladen Island in Bunaken Marine Park. There are cheap Hotels ($ 5-10) both in Ternate and in Daruba or Tobelo. The food is fresh and cheap, the menu on the boats has a lot of fresh fish. You will probably pay $ 3 for a meal in town.

Climate : The climate in Maluku is strongly influenced by monsoons, the proximity to volcanoes and the coastal exposure. Each island has its own peculiarities regarding the climatic conditions but the factor in common in this whole area is the high humidity: every year about 8ft of water rains. Usually from November to March the NE monsoons clear the sky while the SW monsoons, between April and October, bring rainfalls. The transition months of April and October are characterized by heavy rainfall. Fortunately, the good season for surfing coincides with the season of good weather. The temperature variation during the day is minimal and the water temperature is among the highest on earth (29 ° C).

Nature and Culture : In addition to old and rusting jeeps and leftovers from World War II, there is not much in Marati except the dense jungle. In 1988, the prevalence of the remains were removed. There are many submerged ships and bombed planes underwater, which are the main objects of diving.

Dangers and nuisances : This is a virgin area with a low population. For those who will travel on earth… be careful, malaria is present and the humidity level is high.

Practical advice : Bring at least two boards, and a semi-gun in case of larger swells. A longboard could also be useful. The water is extremely hot, so put a lot of wax on. 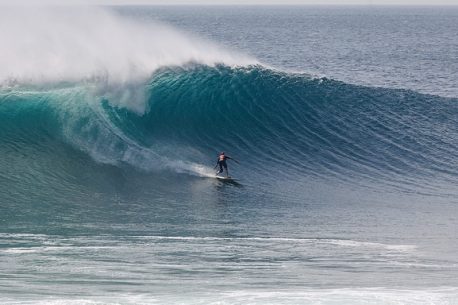