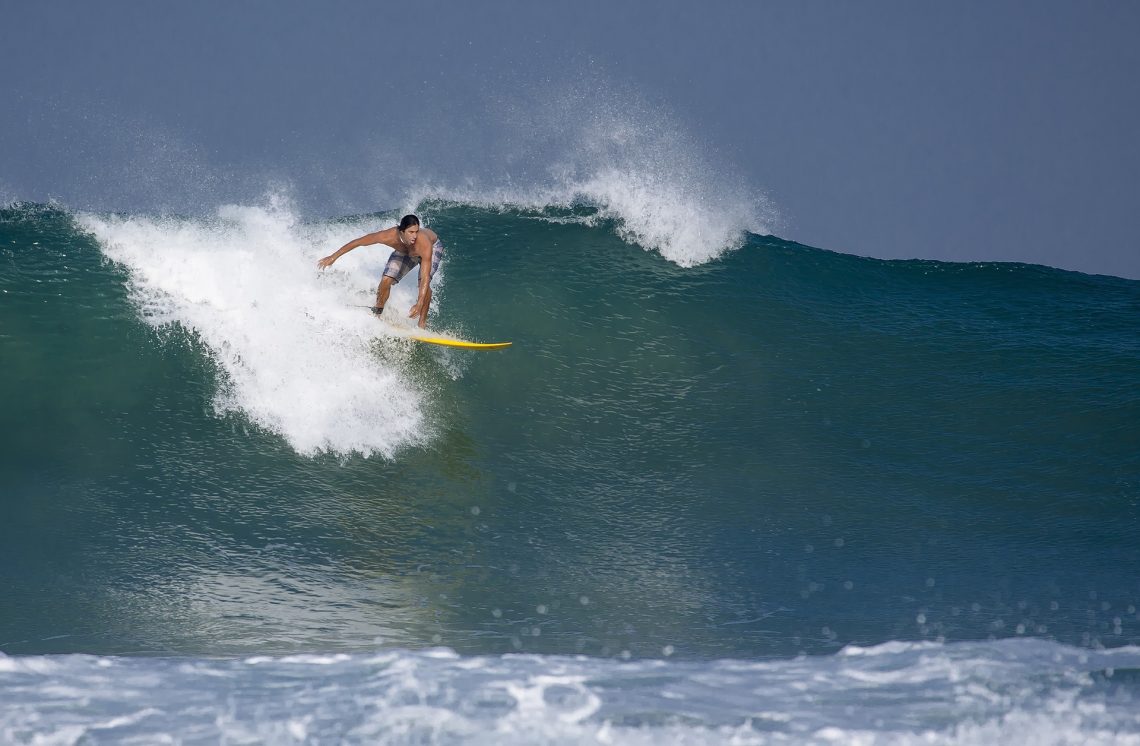 Surfing in Australia? We can fulfill your dream!

Western Australia is the largest state in the country and the one with the lowest population density (maybe in the whole world). Travelling to the North West coast takes you to another dimension. For this reason most of the spots are empty, except Gnaraloo’s “world-class wave”. The natural habitat is very rich and characterized by a great variety of wildlife surrounding it, especially along the 280km of Ningaloo Reef, with its numerous dolphins, turtles, fish, whales (including the largest shark in the world). Western Australia is renowned for the number of sharks in its water, so you have to get easier of sharing surf with many dangerours animals. Looking for new challenges? Australia is waiting for you!

Not so many people has the opportunity to surf in Montebello Island , an archipelago which lie about 120 kilometres off the coast of Dampier. Here marine wildlife is extremely active despite the nuclear weapons tests done in the 1950s by the British military, but only a limited number of people are allowed. Barrow Island hides precious left-hand waves that break for about 2km, but it is difficult to get there, except for the employees of pearl and petroleum industry.

An other place where you can enjoy quality offshore surfing is Murion Left , where  you can ride steady and funny waves. It is 10km north from Exmouth tourist resort where dozens of ships are ready to take you there. On the Northwest there is Dunes, a relaxing spot that is the first of a series of reefs that can give rise to long rides with softer left waves and steeper right ones, but surfers need to be careful to the currents and the number of sharks in this area.

When in winter strong swells arrive, the craziest and most adventurous surfers go towards Exmout’s Lighthouse Bombie. To get there, a boat is required, because it’s too far to be reached by rowing. Here surfers can ride monstrous lefts that breaks with power over a sandy reef creating a wave with a “free fall” take off, and “sink or swim” tubes !!

Yardie Creek is a famous canyon 90km from Exmouth in the Cape Range National Park. A moderate swell will give rise to excellent long lefts. It’s required a boat to reach this spot because it’s a long way offshore. The remote boat station of Gnaraloo features a strong concentration of spots in the south of Ningaloo Reef, 1200km from the nearest town. This place has a great reputation among the surfers communities.

In front of the Three Miles camp, Tombestones is a part of Gnaraloo reef: getting to this spot requires a long row and once you get there, you will find yourself in front of stunning takeoffs and big and powerful tubes that break over a very shallow reef. This dangerous place is only recommended for experienced surfers, due to its remoteness from a hospital, its sharp reef, currents and sharks. Just 6km north from The Bluff there is Turtles which it’s only accessible on foot (and where camping is prohibited). There are quality rights and slightly shorter lefts, both winding down into a very shallow reef.

The Bluff (or Red Bluff) is the reason why most surfers come to this wild area, to ride the legendary and extremely fast lefts that breaks over a reef full of sea urchins. It’s better with 5 / 6ft swell, there are vertical takeoffs that give rise to a breathtaking tube! Helmet and boots are highly recommended.

In Blow Holes and its long and sandy beach, there are more accessible waves that can be surfed, especially with northeastern winds. This place is about 60km north from Carnarvon, which is a major stop for supplies.

Dirk Hartog Island is one of the Australian most unique and remote eco-destinations but has limited accommodation and access; you can reach this World Heritage Site either from Denham by driving a car (4WD only) or by flight. On the North there is Turtle Bay with its long left waves protected from the southern winds. Here the currents can be very strong and remember this is the entrance to the so-called Shark Bay. The same goes for Surf Point , with a shallow reef which can create long tubes in the other part of the island. Medium to large southwestern swells and northern winds are the best conditions. Getting to this place is very difficult because of its strong currents and the number of sharks. Coming from the Carrarang Peninsula, an adventurous 4WD trail leads to Steep Point , the most western point in Australia. This place is dangerous and requires large southwestern and southern swells to welcome surfers. Western Australia is a real constant among surf destinations, thanks to its numerous 3/6ft swells. From April to September there are strong winter swells, generated by the Northern Indian Ocean, travelling from the west coast of Australia to Indonesia. Low pressure systems develop beneath South Africa and they intensify as they move towards the Indian Ocean. Flat sea days are rare in the most exposed spots, but a problem could be the wind. Offshore winds usually blow from the Southeast and more rarely from Northeast. These tend to be strongest and gusty from November to March, making Gnaraloo the perfect place for sailing boats. Northern rainy winds often cause dirty roads that become impassable. The tide range rarely exceeds 2m at Exmouth, while on the South decreases. There can be up to two tides in a day, which profoundly affect most reefs.

How to get there: A valid visa is required for all countries except New Zealand. Perth is the closest international airport. Skywest flies from Perth to Exmouth for $350. The distance between Perth and Carnavon is approximately 1000km.

Getting around: A 4WD or motorhome is recommended, because distances are enormous, accommodation is highly limited and roads are often impassable. Carnavon is 380km from Exmouth by car. There aren’t flights, trains, buses or taxis to reach the spots.

Accommodation and food: Potshot Resort in Exmouth costs $ 20 per night. Gnaraloo & Bluff camp (they are basic accommodation options). 3Miles Camp has tent pitches for $ 16 per person per night and 4-bed cabins for $ 120 per night. Here excellent fish and kangaroo meat is served, you have to try it!

Climate: Gnaraloo has a moderate tropical climate, strongly influenced by the Southeastern wind that blows constantly almost all year round. Temperatures are warm, from 11-26 ° C in winter and 18-32 ° C in summer. The rainy season is from January to July, while the dry season is from June to October.

Nature and culture: The Western Australia is characterized by all nature with an endless coastline and a vast outback. Incredible marine wildlife, wonderful corals, especially around Ningaloo Reef (with excellent snorkelling and diving spots). Shark Bay attracts lots of tourists.

Dangers and annoyances: The waves are big and powerful, recommended only for experienced surfers. Despite the high presence of sharks, attacks are rare, but the reef is sharp and the currents are strong. Be prepared for desert, insect and snake survival.