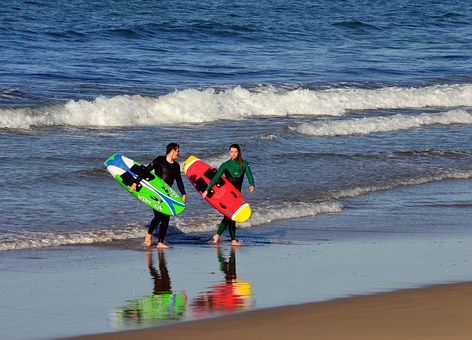 Surf holiday in Australia: discover all the spots in Victoria!

While the Great Ocean Road draws the attention of surfers, there is much more to the surf spot of Victoria that is worth seeing. Go for a surf break in Australia now!

Most of the surfers from Melbourne usually go West because the prevailing southwestern winds are offshore there. What the East Coast lacks in quality, it gains in quantity with spots like Gunnamatta on the Mornington Peninsula or Woolamai on Phillip Island where it is rarely flat. The coast makes many offshore spots with southwestern winds, producing some very great rights in winter storm conditions.

Portsea is only 91km from the capital and it is said that has been home to surf since the 1930s. West of Portsea, there is Quarantines, very uncommon. Sometimes it work well when all the other spots are active. With southeastern winds and big swells the locals take a boat, otherwise they take a long walk to get to the line-up. The large Back Beach stretch in Portsea has variable sandbanks, none of which appear in nearby Spook.

The most constant spot on this South West coast is Gunnamatta, which hosts many contests due to its strength and size. The fast peaks and the quality of waves are influenced by the current that shapes the sandbanks and canals. The lighthouse at Cape Shank attracts a few modest left waves, Meanos is the closest wave and, even at high tide, lefts can be scary while right is easier.

Suicides, the main spot in Point Leo, is actually a funny right-hand point with long walls to check out on big swell days; the incoming tide creates the best conditions. If the waves aren’t big enough, check out some other spots in the area like Peak Rock and Crunchies Pt.

Phillip Island is 26km long, 9km wide and it is a popular tourist destination attracting around 3.5 million visitors every year. There are more than 20 spots ranging from quality beachbreak to reef with a-frame waves and world-class pointbreaks.

The western extremity, well known for the high number of penguins and its breaks in its north side, is Flynn’s Reef with its epic right offshore winds from the Northeast and South. Cat Bay is a quiet beach where all beginners should go, especially in days of waves with winds from South. The South side has some good right pointbreaks like The Crack, a section of Summerland Bay. Smith’s Beach is a rare but relaxing beachbreak (which works at low tide) protected from the wind, right near Express Point, and it is suitable only for more experienced surfers. This latter is the most radical reef on the island, hosting world-class waves and legendary tubes for regular surfers.

Surfies Point is a spot that only begins to break with the largest swells, with direction from South and East.You can find the most rideable beachbreaks in Woolamai, a series of powerful breaks overlooking a car park. If you need more space, walk east to Magic Lands; if Woolamai is flat there is always Kilcunda in this stretch of coast. The swell magnet is often too large and dangerous but the strength of the waves is as a rule here. Another spot that maintains thunderstorm conditions is Eagle’s Nest 8km from Inverloch whose long, slow rights are similar as Torquay’s right pointbreaks: this spot needs to be controlled with large swells from South and winds from West.

Southwest Australia has great conditions, sometimes up to16-19ft but it’s Southeast Australia which sees clean, brushed waves from the prevailing westerly wind. When summer arrives, the southwest exposed beachbreaks enjoy extra consistency even if the western and southwestern winds are onshore. There will be a lot of (active) waves around 2-6.5ft and smaller, cleaner waves in the pointbreaks. Due to Tasmania, the low pressures could stop in this area, sending swell to the coast from the South and Southeast. Winds tend to blow from West, but more Southwest in summer and Northwest in winter. When the cold winds move towards the coast, however, predicting the direction of the wind becomes rather difficult. The tide can reach 8ft.

How to get there : All countries require a visa but not New Zealand. Melbourne is the second busiest airport in Australia and it is open 24 hours a day, serving all major airlines (Virgin Blue and Qantas are the most known). Melbourne is a 10 hour drive from Adelaide and Sydney. A taxi to the inner city costs $ 25. Reaching Portsea by car takes 1h, while Phillip Island takes about 2h. Boarding Tax: $ 21.

Getting around : Victoria has first-class freeways. The roads are classified with M (freeways), A (highways), B & C according to their quality and function. Phillip Island is connected to the mainland by the 640m San Remo Bridge. Renting a car costs around $ 30 / day.

The Climate: South Victoria has the coolest climate in Australia, but it isn’t rainy. The heaviest rains occur on the east coast. The main problem is the instability, so the weather can change at every moment. Australian people use to say: “if you don’t like the weather, just wait a minute”. Avoid the period from June to August as it gets quite cold. Summer (from December to February) is dry and hot, with temperatures up to 22 ° C. The weather never gets too hot, and in winter it drops to 12 ° C. You will need a 4 / 3mm during the winter and a short wetsuit in the summer.

Nature and culture: Phillip Island is famous for its motorcycle Grand Prix in October. Don’t miss the Sea Rock Sea Life Center, The Nobbies and the Blowhole at Point Grant.

Dangers and annoyances : If you don’t consider the crowds and reef cuts, there isn’t much to worry about. The number of sharks is low even though great white sharks have been spotted. Great and good waves in the southwest coast. Pay close attention to strong currents.

Tip : Buy the equipment at the local shops. The famous Trigger Bros surfboard & shop in Sorrento has the following prices: boards up to 6’7 ”from $ 470, longboards from $ 780. Try also to contact the Ozmosis Boards in Hastings. East Coast Surf School in Pt Leo, Mornington Peninsula Surf School in St Andrews Beach offer great lessons. Mornington is home of the Balin Surf brand.