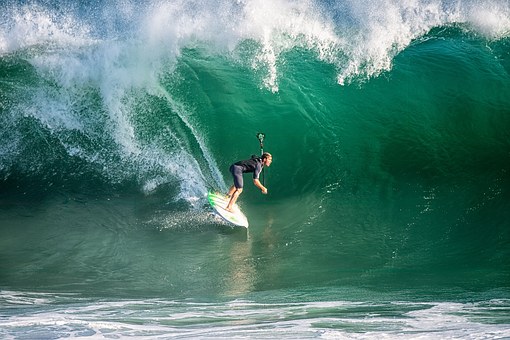 Go on a surfing holiday in Santa Barbara now!

Although the Santa Barbara area is located on a south-facing coast, the swells from the S and SW are completely blocked by the presence of the four great Channel Islands. Point Conception narrows even more the window of possibility of W and NW swells that wrap around the head and converge in Santa Barbara. When that happens, what it lacks in quantity is made up for by the quality of an unrivaled set of right-handed pointbreaks. This conformation is the best in California for all medium and large sized W-SW swells. At the west end of the area, the Hollister and Bixby ranch areas, near Point Conception, have no islands in front and therefore collect all swells from N to S. North of Conception, the W-facing coast is exposed to a multitude of swells, making spots like Jalama, Surf beach and Point Sal perfect spots for morning sessions when the sea comes in from south. Moving east, along the Santa Barbara Channel, you will find a number of points that mainly work autumn swells and winter from W and NW. These include Refugio, El Capitain and Campus Point. Leadbetter Cove is a little further north of the Santa Barbara marina and is a fun right-hand pointbreak and other peaks. The crowd is friendly which is ideal for longboarders. The Sandspit, the inlet between the harbor embankment and the Santa Barbara Municipal Pier is another story: it rarely works, but when the conditions are great, it is a fast and tubing wave that requires perfect timing in the take off. Sandspit starts to crack only with consistently sized W swells. A mile south of the pier there are a few left and right waves breaking on the sand that connect up to Hammonds Reef, a semi-point destroy of excellent quality. These spots are usually not protected from the wind, so around noon (time when the wind picks up), they get ruined. Following the coast you will find Fernalds Point in Summerland; the Carpinteria town offers a mediocre quality beachbreak located right in front of the state park. Shortly after is Rincon, the “Queen of the coast”. The view from Highway 101 of the bars rolling out into the bay is breathtaking. The crowd is large if you jump to the first or second point (better stay in the outermost 3). Rarely all three connect even if the section between the first and the second can be covered with medium-sized swells and the medium tide. Continuing east on Highway 101, most of the coast is suitable for surfing. La Conchita “straits” offers several peaks, while Little Rincon produces long right-hand walls that break close to the rocks. Oil Piers is good for both a morning and afternoon session. There are many other reefs going towards Pitas Point. Try Solimar Reef if you have enough experience, otherwise ride the innermost beachbreak. The next spot before you cross the bridge is Overhead, a chaotic beachbreak where the locals pose somewhat loudly, located alongside a large wave on an external reef (holds up to over 5m). The big spot in Ventura is between the point and the pier, an area that includes Pipes, Stables, Fairgrounds, and California Street. California is waiting for you, book your surf stay in Santa Barbara now! 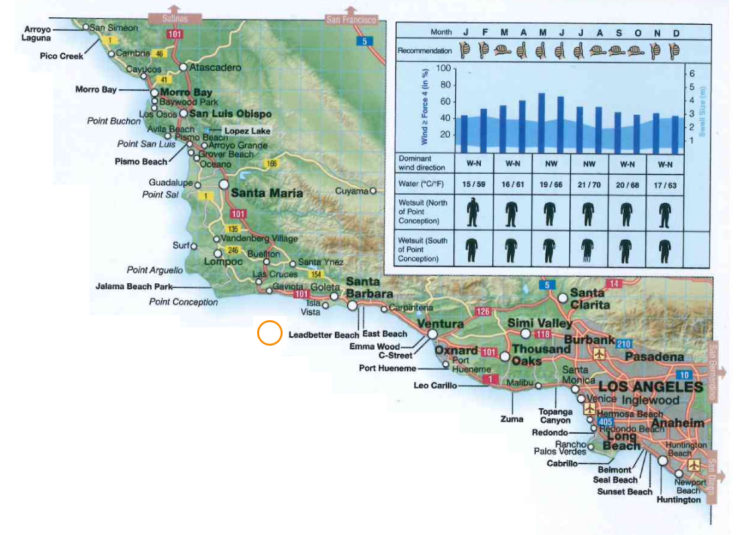 The primary source of swell in winter (from October to March) comes from the NW. Waves can reach 4m but on average they vary between 3 and 8ft. The Point Conception blocks all swells from N-NW. The groundswells and hurricanes from Mexico are mostly blocked by the Channel Islands (San Miguel, Santa Cruz, Santa Rosa, and Anacapa) especially in Santa Barbara County. During the summer season there are frequent groundswells from W (measuring 2-6ft) and windswells. Flat, offshore days are more frequent in winter although the wind from east (called Santa Ana) tends to blow in late summer. The prevailing winds are NW-W, between December and August, so conditions in these months (from midday to sunset) could be stumbled. Glassy days are more frequent here than in other places on the west coast. The tides vary between 4,2 and 7.5ft.

How to get there: Flying into Los Angeles at the international airport, which is 1h30 from Santa Barbara. you can take a train for $ 20 or a bus for $ 15. Or an internal flight to Santa Barbara lasting approximately 45m.

Getting around: Public transport is not indicated with the board. Getting to the beaches is easy unless there are private properties. The advice is to rent a car, if you can’t, we advise you to stay in Carpinteria.

Accommodation and food: Carpinteria has two motels for $ 40-50. Santa Barbara has 34 beachfront hotels from the most luxurious to the cheapest. You can camp at the Carpenteria State Beach campground. Fast food is affordable and it costs around $ 8 per meal, restaurants are expensive.

Climate: Southern California is famous for its consistently reliable sunny weather. It hardly rains mostly spring through fall, but there are plenty of morning mists, which dissolve by noon, not like the constant LA smog. The sun shines, perpetuating the light on the sea breeze. The driest and sunniest weather comes in late summer with Santa Ana conditions when winds blow from the desert. From November to February the weather becomes more or less winter with very few rainy days. The water temperature is the hottest in California, but still requires a steamer most of the time. The water is warmer in Santa Monica than in San Diego because there is no upwelling. El Nino has milder temperatures, lots of waves and rains.

Dangers and annoyances: Most pointbreaks are visible from highway 101. Oxnard’s beachbreaks are less crowded but localism is more frequent in the water. Remember the private properties. Granite rocks can hurt you. Shark viewing cruises are just north of Santa Barbara.