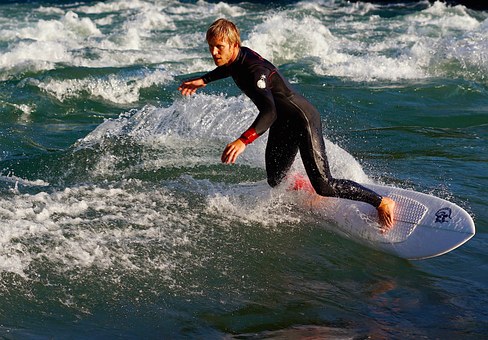 Join us for an unforgettable surf experience in Santa Monica! An irregularly sprawling metropolis with an approximate population of 10 million, Los Angeles is home to many movie stars, extravagant housing, 12-lane streets, and some 60 miles of Costa Pacifica. Among the surf spots in California’s biggest cities, no one can claim to be as famous as Malibu with its long rights crashing over the coastal area of Highway 1. Tom Blake pioneered this break in 1926, but Malibu only really became famous in the late 1950s and early 1960s. Like many other surfers, Miki Dora’s wave-riding style prowess exposed the wave to the world of surfing, while a film based on the life of a Malibu surfer, Gidget, introduced surf to the world of the big screen. With the exception of the northern area of Santa Monica and the Palo Verde Peninsula, Los Angeles County is surrounded by beachbreaks accompanied by man-made structures such as piers and jetties that create quality waves. The strong development of the Los Angeles Basin has produced a large urban runoff from the coastal concrete jungle, causing regular beach closures for high levels of bacteria and other toxic pollutants. Malibu works best during swells from the south, and given the direction it needs, it’s a perfect spot for the summer season. Here you will find a lot of surfers distributed in the different sections of the wave, all of which connect only on the most consistent days. Going from the small valley of Third Point to the perfectly formed, multi-functional First Point, Malibu is exposed to all tides and overrun by an incredibly large and diverse crowd of surfers. Due to heavy rains the Malibu lagoon overflows into the line-up, which often causes the beaches to close due to bacterial pollution. Topanga Beach has another long right-hand pointbreak, less perfect and more crowded than Malibu. Chart House offers a more intense ride as it crashes at high speed into the reef below. Beware of rocks and currents. Another perfect pointbreak for regular surfers is Sunset Boulevard, which in rough sea conditions from W, offers not very consistent waves suitable for all surf levels. Santa Monica offers good conditions for anyone who isn’t afraid of facing California’s highest pollution levels. With solid swells from the S-SW, you’ll find tubing and powerful waves on almost every beach in the area. Municipal Pier is another alternative for surfing. To surf small waves on a beachbreak, at low tide, head to popular Bay Street like. Best known for outdoor gyms, Venice Beach holds up even the biggest winter swells. With the summer swells from SW Ballona Creek can give you small and fast rights, in a spot called Toes Over (located in the south part of the pier). The lefts further south of this spot are perfect for longboarding, but are often closed due to pollution problems. The beach of El Porto is the largest of the surrounding ones and holds up even the biggest storms; the leeward side is always crowded and sensitive to the wind. They also break good quality waves on both sides of Manhattan Beach Municipal Pier, attracting many surfers to this beach, who first rode Dale Velzy in 1951. Hermosa Beach is another popular beachbreak, better with small swells as when the size increases, tends to close out. Redondo Beach Breakwater is a serious spot not to be underestimated as it holds waves up to “triple overhead”; to be surfed you need experience and suitable equipment. Many other beachbreaks extend south to Palo Verde Peninsula. 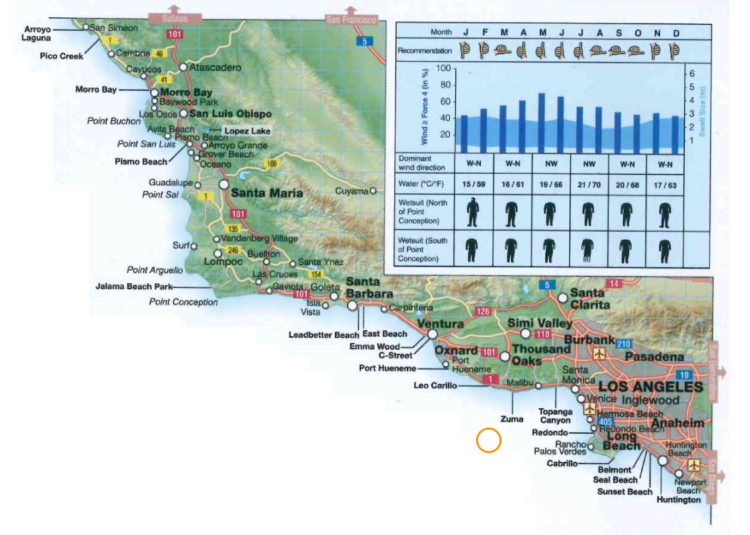 The primary source of swell comes from the groudswells from SW, which hit the coast from April to September, and from tropical cyclones that arrive from Mexico between July and October. Waves can reach 11,5ft high but on average they are between 3-8ft as Santa Catalina Island can act as an obstacle for some swells. The Aleutian Depression in Winter (October-March), brings waves of 2-8-ft  on all beaches but not between Malibu and Santa Monica. Before and after the summer, frequent W swells bring waves of variable size between 3-7ft. The prevailing winds are NW-W. The sea breeze from the NW usually tends to jam the waves, which tend to break from noon to sunset. Winds are rarely strong, so glassy days are pretty common. The tides vary between 1 and 2 m; finding the tide tables is very simple.

How to get there: Los Angeles International Airport (LAX) is one of the cheapest in the world to fly to. A shuttle takes people into the city center, 45 minutes away for about $ 15, which is half the cost of a taxi. LAX is not far from the El Segundo spot.

Getting Around: Los Angeles has built an extensive road network including freeways up to 14 lanes wide. These allow you to move quickly through the vast metropolitan complex with the exception of rush hours from 7 to 9 in the morning and from 4 to 6 in the afternoon. The rental starts at $ 160 a week but goes down if you rent cheaper cars even up to $ 50. Public transport is not suitable for surfers with boards.

Accommodation and Food: The Malibu Beach Inn is right on the beach, south of the pier ($ 170 for a double room); Casa Malibu Inn is cheaper, from $ 100. Malibu Creek State Park Campground is open all year round and affordable. Other options include the California Hotel in Santa Monica ($ 160) or the Cadillac Hotel in Venice ($ 80).

Climate: Southern California is famous for its consistently reliable sunny weather. It hardly rains especially from spring to autumn, but there are many morning mists, which dissolve by noon. The sun shines, perpetuating the light on the sea breeze. The driest and sunniest weather comes in late summer when the Santa Ana (wind from the E coming from the desert) starts to blow. The water temperature is the hottest in California, but using a wetsuit is necessary most of the time. The water is warmer in Santa Monica than in San. El Nino brings milder temperatures, lots of waves and rains.

Nature and Culture: From Highway 1 you can see the houses of rich and famous people in the hills. LA offers endless entertainment. A must see are the characters of the Venice boardwalk gallery.

Dangers and Nuisances: Fires, floods and earthquakes are common in the Los Angeles area. In the water, crowds and pollution are the biggest problems. There are no secret spots but those that are more difficult to reach are less crowded. Many workers usually go at dawn; there should be less crowds during the day than early in the morning.

Tips: Only Redondo Beach Breakwater requires a Gun; in the other spots it is better to surf with normal shortboards or longboards. Surf shops are plentiful and a board costs around $ 400. Zuma Jay rents boards in Malibu for $ 20 a day. The main schools are Makos in Malibu, Pure Surfing Experience in Manhattan Beach and Surf Academy in Hermosa. 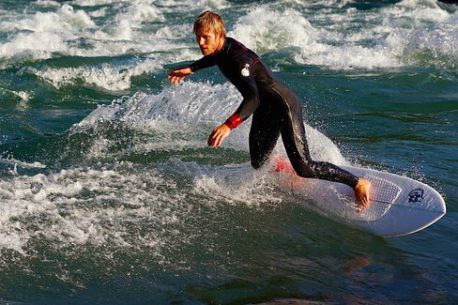