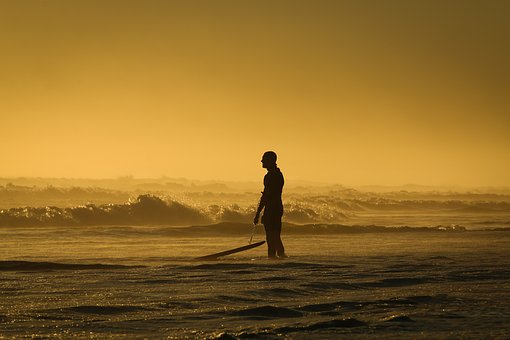 Surfing stay in Japan: the island of Tanegashima

Tanegashima Island, located about 40km off the south end of Kyushu in Kagoshima Prefecture, is one of top surfing destinations in Japan. Thanks to the length of the island, the exposure to both Pacific and East China Sea swells, and its elongated shape, the likelihood of waves is high at any time of the year. There are a variety of breaks suitable for all levels of surfers and the water is relatively warm all year round. Many surfers have moved to Tanegashima for surfing, which can get very nice from both coasts, particularly after a typhoon hurricane. Don’t hesitate, book your surf holiday in Japan now!

The most northern break, Chinbotsu , breaks in front of a shipwreck and it holds large swells with a NE-SE direction. This wave is best when the high tide covers the rocks. Kazamoto is a funny break in the rivermouth  that becomes beautiful when other places on the Pacific coast tend to close-out.

Another break is Azakou , better with the rising tide and all the swells from east, it’s a good place to check out when the other spots are crowded. When there aren’t many swells in the area, Kanehama’s winter beachbreaks almost always offer powerful and funny small waves. Comforts like parking, showers and toilets make it a very comfortable spot. Rock and Hungry are two spots located close to each other just south of Kanehama. Rock breaks out of Anjou Port with large swells from E-SE but doesn’t work often; on the contrary, Hungry is a very constant reefbreak that offers quality waves with the possibility of surfing up to 200m long. It is usually a left but also breaks right when it gets bigger. Best at low tide and all swells from east. The covered breaks in Injou are often glassy and handle winds from south to northwest. This is usually a right wave that begins to break even to the left as the swell from east increases in size. Watch out for the rocks on the inner surface. Nakayama is a beautiful beach with 3 breaks; Minato in the north, Center in the middle and Takeyano in the south. This spot is generally better at low tide and works with E-SE swells (winds are offshore when blowing from west and northwest). In the southern part the choice is between 3 spots. Toudai-shita is located under the lighthouse near the Space Center. This beachbreak catches a lot of swells from March to October and it can be very powerful. The ideal conditions are with the rising tide and with E-SE swells. Around the cape, on the south end of the island, opposite the Iwasaki Hotel, there is Hotel-Mae . This beachbreak is crowded as it is offshore with regular winds from northwest and northeast. Generally, the left on the left side of the beach is the most constant spot during all swells from south. Also on the south coast, a little west of Hotel-Mae, there is Takezaki . There are numerous A-frame peaks along these beaches that offer great rides when the sandbars are good. The west coast that faces the East China Sea is less constant than the east coast. Yakutzu is a very funny beachbreak that captures the typhonic swells from southwest and west. Nagahama is a long beach on the west coast of Tanegashima. In the north part of the beach there is an excellent peak with a sandy bottom. The lefts in particular can offer long walls and even pipes when there are swells from the west and winds from the southeast. Check out Sumiyoshi , a heavy beachbreak outside the port which has the same name. Known for its large tubes and its ability to handle larger swells, the peaks work best with SW swells combined with NE winds. The seafloor is very shallow so it is a break for the more experienced. Yokino is the main settlement of Tanegashima. You will find various peaks and reefs both in the middle and at the south end of the picturesque white sand beach. Reefbreaks on the north coast tend to hold larger swells so they work best during typhoon season, from July to October. Tanegashima offers good opportunities to surf the two different seas with various options. The Pacific Ocean on the east coast provides NE-SE swells all year round, but the main surfing season is from July to November when the typhoon summer brings strong SE-SW swells. These swells can also affect the west coast of the island in the East China Sea as well as low winter pressure systems carry SW-W swells from December to February. Surf prevalence is 2-4ft with occasional super typhoon swells reaching 10-13ft. The tides are semi diurnal and reach 7ft during the spring.

How to get there : No visa is required for 90 days. Fly to Tenegashima (TNE) from Tokyo Hanefa Airport via Kogoshima (3h) or directly from Itami Osaka Airport (1h20min). It is also possible to access by boat from Kagoshima. Boats from nearby Yakushima take 50min.

Getting around : Public transportation from Tenegashima is limited and infrequent. Taxis are available but quite expensive due to the relative long distance between breaks. The best option is to rent a car (from $ 50 / day).

Accommodation and food : Accommodation consists of separate units, family guesthouses or standard hotels. Surf Villa Narai and Mauna Village are specific for surfers. Sushi, sashimi and sweet potatoes are a predominant feature of the island cuisine. You will pay $ 15-20 for a meal.

Climate : Despite its sub-tropical location, Tanegashima is a mostly flat and dry island compared to Yukushima. The fact that it is drier doesn’t mean that it isn’t subject to precipitation phenomena, indeed, since it is located in the typhoon alley (between Okinawa and Kyushu), in the summer the rainy days can be several. Typhoons and low winter pressures can produce the best swells, which reach the Pacific coasts between July and October and those of the East China Sea between December and February. The climate is very hot and humid during the summer, but if you decide to visit this area in the other seasons you will need a little warmer clothing. The average annual rainfall level is 1200mm. To surf in the summer you will need a swimsuit, while during the other seasons a 3 / 2mm long wetsuit.

Nature and Culture : You will enjoy a relaxed lifestyle, which will offer a welcoming escape from the gray Japanese suburbs. Large caves with limestone stones border the white sand beaches that characterize the SE coast.

Dangers and Nuisances : You will encounter the best conditions for surfing during the summer typhoon swells, which means: hard access to the sea, canceled flights and ferries. The line-ups fill up when the waves are big and the locals dictate their ownership, but if you’re polite and friendly you shouldn’t have any problems.

Seggerimenti : It is possible to rent some boards but the prices are high. There is a surprising variety of ethnic cuisine. The knowledge of English is high compared to the rest of Japan, but if you don’t speak Japanese at all, it can be difficul to communicate 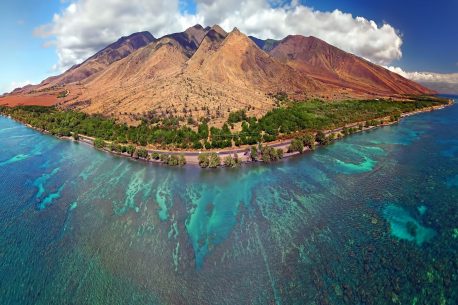 The island of Maui is the second largest island (1883 km²) of the Hawaiian islands. It is home to Maui County, which also includes Molokai, Lanai, Kahoolawe, and the islet of Molokini. Geographically, the island welcomes two large volcanoes, one to the west (the mountains of western Maui until Pu’u Kukui) and Haleakalā to the […]