New Zealand is immersed in the Southern Ocean and receives the full force of the Roaring Forties swell that come out of the middle of the ocean. The North Island of the country is an easy place to visit, receives decent quality waves and is not yet fully exploited by adventure-seeking surf travelers. Close to the capital Auckland is New Zealand's most famous wave, the super long and perfect Raglan left. Another 5 hours to the south is the Taranaki area and the pile of waves around the base of Mt Taranaki from Waitara (in the north) to Hawara (in the south). This area receives many swells and the largest concentration of quality spots in the North Island. There are surfers who like to protect their "secret spots" but there are numerous other spots to explore. That's why it's the perfect destination for your next surf vacation in New Zealand!

If the wind is weak or absent (unusual for this region), check out Waitara Bar. With high tide and fairly large swells , the Waiwakaiho reef might be ideal for longborders. In the country of New Plymouth, Fitzroy Beach is the main spot (beachbreak) that with consistent swells and low tide offers fun tubing. In winter (May through October) the best option is to be in New Plymouth in the Oakura area for a quiet environment. This is the area where many surfers head to take refuge from the strong SW winds and to surf the waves of Back Beach . In Oakura there is a beachbreak that works at high tide, suitable for beginners, and some reefs to the south that are worth testing. Ahu Ahu has not-so-pretty lefts and the occasional quicker right. The area is teeming with reefs: Punihos, Paora Road and Stent Road are the most famous. Stend Road is the most constant spot with two wraparound tubing right hands!

When the winds turn N-NW in the spring / summer, move to Opunake , a town of 1,600 inhabitants that is home to a good beachbreak and many other killer spots nearby. These waves are very constant and not crowded but exposed to the SW wind. These spots work best during low tide. Despetation Point is a large wave that holds up to 5m. With clean swell conditions, Mangahume becomes an a-frame peak that breaks right in front of the river mouth. Ultimately, Green Meadow (in Pihama), is one of Taranaki's gems: a pointbreak that has long and excellent right-handed. All around this area there are trails that lead you to the ocean and the waves. Always ask for permission before crossing private property and close all gates to agricultural properties. New Zealand is exposed to swells from all compass directions, but it is in the west coast that the groundswell from SW-E hit. Taranaki regularly receives 4-12ft of waves all year round, but the best time is between April and October. During the summer (December-March) there is a small chance of NW swells or cyclones. In the summer months these coasts receive constant offshore winds from E. The months between February and April are the best months for these winds. Overall the predominant wind comes from the SW all year round. The worst wind direction is from N-NW which characterizes the spring season. Driving to the east coast takes 6 hours, a great option when thunderstorms hit the west coast bringing onshore winds. The range of the tide is significant and influences the prevalence of spots, especially in the mouths of rivers.

How to get there: No visa is required for most nationalities. The prevalence of visitors fly to Auckland. Air New Zealand charges to load the boards. Driving from Auckland to New Plymouth takes 5 hours. the road is a little shorter if you go through Wellington. Flying costs $ 100 and bus fare $ 135. Departure tax for international flights is $ 10.

Getting around: Public transport is not efficient here, so you will appreciate the holiday more if you have a rented car to move freely along the 'Surf Highway'. Hitchhiking is more common in the mountains than in the coast.

Housing and Food: New Zealand is an inexpensive place to travel. There are myriads of backpackers and beach camps, all of which are cheap. The Wavehaven in Oakura is a cute villa that sleeps up to 24 people with prices from $ 5 for a dorm up to 8 / double. Opunake backpaker costs $ 18. New Plymouth has prices a bit higher than the market. The average expense for a basic meal is $ 6.

Climate: Sitting in the south side of the Hemisphere, the North Island of New Zealand has a moderate wet climate influenced by winds from SW-W which blow over the country all year round. Time changes rapidly and anything can happen. The rains are quite heavy from May to August with cold temperatures and lots of snow on Mount Taranaki. Winter is the best time for bigger and more consistent swells and it's also the best time for skiing and snowboarding. Summer can hardly be called "tropical". Bring some warm clothes. Same story for the winter: bring a good 4 / 3mm wetsuit for the winter and a 3/2mm for the summer.

Nature and Culture: Aotearoa or The Land of the Lord White Cloud is a paradise for exciting outdoor sports. It is possible to ski, climb, bungee, paraglide, climb mountains, swim and all that you can find in the middle of these activities. Snow covers Mount Egmont which dominates the skyline around Taranaki.

Dangers and annoyances: There is nothing to worry about. Be prepared for cold, wind and rain. Most of the local surfers are friendly to traveling surfers.

Practical advice: You will find fairly inexpensive equipment either at Del Free 'n' Easy or at Seasons in New Playmouth. New Zealand has a slow lifestyle but high and developed infrastructure.

Exchange rate fluctuations with fluctuations greater than 3% will lead to an adjustment of costs. They will be communicated within 20 days of departure. 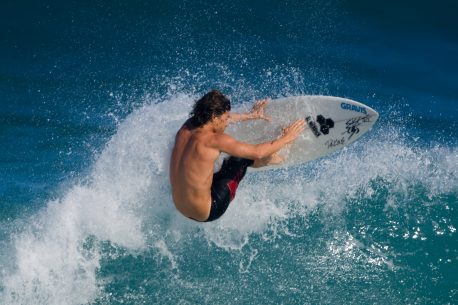